You are here: Things to Do > Slieve Gullion 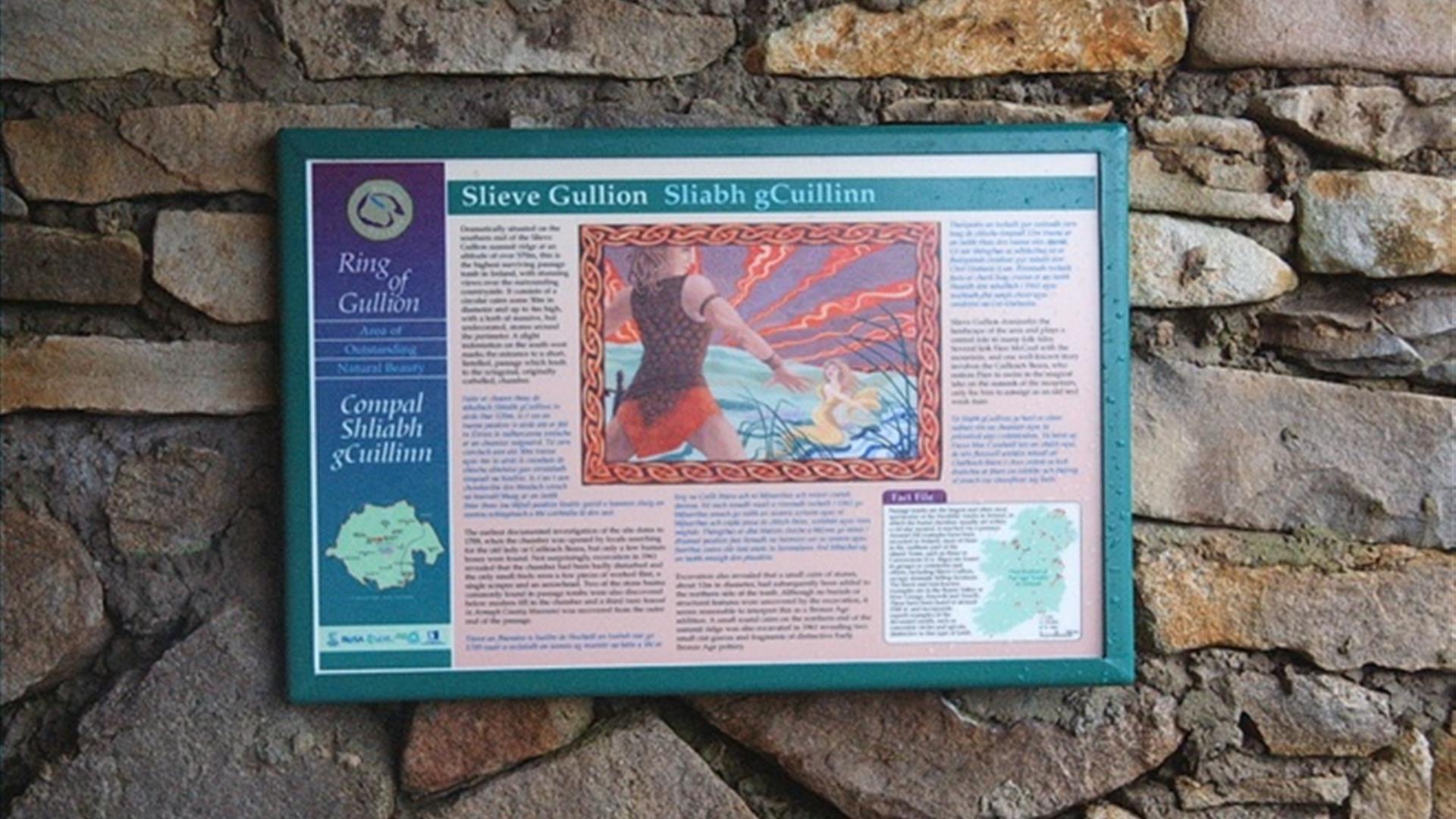 The walk is located within the Ring of Gullion Area of Outstanding Natural Beauty (AONB). The AONB is an area of national landscape importance and is centred on the craggy heather covered hills of a circular ring dyke volcano that erupted over 50 million years ago. The Ring of Gullion is the most famous ring dyke in the world having featured in geological debate and theory over the past 160 years.

Slieve Gullion rising to 573m is the centrepiece of the volcanic landscape and is a Special Area of Conservation (SAC) which recognises the importance of the geology and the upland heather moorland. The purples of the heather contrast with the yellow of dwarf gorse and orange of the bracken to create rich mosaics of colours which contrast with the many greens of the agricultural ladder farm landscape.

At the base of the mountains are a network of lowland loughs associated with a diversity of fen, bog and wetland vegetation including bulrush, cotton grass, bilberry and deciduous woodland.

People have lived in the Ring of Gullion for over 6,000 years. The area is renowned for the wealth of Megalithic and early Christian monuments including over twenty large stone tombs. Also close by is the Dorsey, dating from the Iron Age period. This is a massive earth embankment and rampart which sits astride an ancient routeway to Eamhain Macha, the ancient capital of Ulster.

The Ring of Gullion and Slieve Gullion, in particular, have rich associations with Irish legends and myths. In one tale, Finn McCool was bewitched by Miluchra on the summit of Slieve Gullion at the Lough of the Calliagh Bhirra. To this day the superstition survives that if you bathe in the lough your hair will turn white.

Route:
The walk starts and finishes in the car park adjacent to the Slieve Gullion Courtyard Centre in Slieve Gullion Forest Park. Follow the path uphill fromthe car park, passing the childrens play area on your left. The path continues uphill through deciduous woodland for about 1km until arriving at a log bench opposite a Ring of Gullion Way marker post. Turn right on to the forest drive and continue uphill through a stand of mature beech trees for 800m. Turn right on to a short section of forest track until the upper forest drive is reached. Turn left on the forest drive and continue along the southern slopes of Slieve Gullion for about 2km until an upper car parking area is reached on the left hand side. This section of the trail has magnificent views of the Ring of Gullion peaks of Croslieve, Slievebrack and Mullaghbane Mountain. In the upper parking area are interpretation panels that explain the geology of the area and provide further walking information on the Ring of Gullion Way. Turn right fifty metres beyond the parking area up an initially steep mountain path. Continue on over a stile until a stone shelter is reached. The views in this section expand to include the peaks of Slievenacapple and the Ring of Gullion to the North. An interpretation panel at the stone shelter illustrates the legends associated with the area and the legendary Finn McCool. Passing to the right of the stone shelter the path becomes steeper, traversing areas of peaty and rocky ground. After 500m the path arrives at the summit of Slieve Gullion and the Neolithic South Cairn Passage Grave. The tomb can be entered from just below the summit. Panoramic views from the summit take in the Mourne Mountains, Carlingford Lough, The Cooley Peninsula, the Armagh Drumlins and beyond. The path continues North-West along the summit plateau arriving at Calliagh Berras Lough after 800m. Continue past the lough to the North Cairn which is also a Bronze Age burial chamber.  Veer right after passing the North Cairn and continue on the path. Descend for about 2km down the North side of the mountain until reaching the Ballard Road. Turn right along the country lane and follow it as it undulates through the countryside. Keep right after 2km where the road forks and continue to Killevy Old Churches an ancient convent dating from the 5th Century. St Moninna is buried in the churchyard. St Bline’s Holy Well is on the hillside above. Continue along the country lane, past Clonlum South Cairn Portal Tomb on the left and Killevy Castle on the right for a further 2km before turning right at a cross roads. Continue through gateposts on to the exit drive from the courtyard centre and the car park. Please note that this walk is in an upland enviroment, where it may not be appropriate to install waymarkers. Walkers should come prepared with an OSNI map and compass, as visibiliy in all weathers cannot be guaranteed at the top of the mountain. These walks are situated in a working forest environment and may be subject to diversion and closure from time to time. Up to date information is available on the Forest Service web site - link below.

Publication availability:
Newry Tourist Office 028 3031 3170, or alternatively available to download on this webpage.